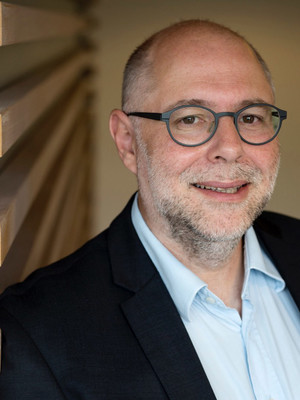 Harry Buhrman is  professor of algorithms, complexity theory, and quantum computing at the University of Amsterdam (UvA), group leader of the Quantum Computing Group at the Center for Mathematics and Informatics (CWI), and executive director of QuSoft, a research center for quantum software, which he co-founded in 2015. He built the quantum computing group at CWI, which was one of the first groups worldwide and the first in The Netherlands working on quantum information processing. Buhrman’s research focuses on quantum computing, algorithms, and complexity theory. He co-developed the area of quantum communication complexity (distributed computing), and demonstrated for the first time that certain communication tasks can be solved (exponentially) more efficient with quantum resources. This showed that quantum computers can not only speed up computations, but also communication – which opened up a whole new application area of quantum information processing. Buhrman co-developed a general method to establish the limitations of quantum computers, and a framework for the study of quantum query algorithms, which is now textbook material.

He obtained a prestigious Vici-award and has coordinated several national and international quantum computing projects. He is a member of the Scientific Advisory Board of QUTE-EUROPE and QUIE2T (European) and of CIFAR, IQC, INTRIQUE (Canadian). He started and chaired the first steering committee for QIP, the main international conference on quantum information processing.