Barbara Terhal appointed as new member of the KNAW - Royal Netherlands Academy of Arts and Sciences. 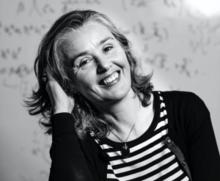 Professor Barbara Terhal, group leader at QuTech and the Faculty of Electrical Engineering, Mathematics & Computer Science of TU Delft, has been appointed as new member of the Royal Netherlands Academy of Arts and Sciences (KNAW). Barbara Terhal is a member of the Gender & Diversity Council of Quantum Software Consortium.

In the Netherlands, membership of KNAW is a significant accolade for an academic career. A total of 18 new members have been appointed.

Members of the KNAW are leading scientists from a wide variety of different disciplines. They are chosen on the basis of nominations by colleagues, both from within and outside of the Academy. Membership is for life. The new academy members will be installed later this year.

Professor Barbara Terhal (1969) joined QuTech in 2017 and is an expert in the field of quantum information theory. Terhal received her PhD degree Cum Laude from the University of Amsterdam in 1999 on “Quantum Algorithms and Quantum Entanglement”, making her the first person to get a PhD in quantum computing in the Netherlands. During her PhD thesis work she developed the concept of an entanglement witness to detect the presence of entanglement in a quantum state. Currently, Terhal and her team focus on quantum error correction. This research domain is crucial for the goal of building reliable quantum computers from partially-coherent, noisy, qubits as they currently exist in the lab.

Read the Press Release by the KNAW (in Dutch) for more information.