Shell works with Leiden and VU researchers on quantum computer algorithms for chemistry.

Quantum computing is a revolutionary technology, where the often unintuitive characteristics of quantum mechanics merge with information theory to solve certain specialised computational problems very differently, and possibly much faster, than on computers available today. Computational chemistry is one of those problems. It is of great interest to Shell’s fuel retail, chemicals, catalysis and new energies businesses. Quantum computers of the scale needed for solving complex challenges do not yet exist. Shell has entered a 5-year collaboration with Leiden University and VU Amsterdam to progress this field, and to discover how to use them across Shell’s businesses.

Computers perform calculations using ‘classical’ bits: electronically-coded ones and zeroes. A quantum computer is a different beast. Founded on the laws of quantum mechanics, its basic unit of information can be either 1 or 0, or in a superposition of both at the same time. This unusual feature allows for multiple calculations to be performed in parallel. Mathematicians and physicists in the 1980s and 1990s showed that this principle can be used to dramatically reduce the computational effort for certain types of calculations, resulting in what is called a 'quantum speedup' over regular computers.

Quantum computing has the potential to simulate chemical interactions at a speed and scale fundamentally exceeding what is possible today. Molecules are quantum mechanical systems and solving the underlying equations is impossible on today’s supercomputers for even small molecules without crude approximations.

Quantum computing will be a critical enabler to simulate complex chemical systems at industrial scale, such as catalysis in petrochemical operations. Even more important is the faithful modeling of complex chemical processes at the core of many low carbon-intensity technologies such as photocatalysis for capturing and storing solar energy, water electrolysis to make green hydrogen, the capture and conversion of CO2, and the partial oxidation of methane to elemental carbon and hydrogen.

‘Molecules speak quantum, so it makes sense to ask a quantum computer for help in the search for useful molecules’ says Carlo Beenakker, Professor in theoretical physics at Leiden University. ‘Nothing beats a native speaker.’

Quantum computers are still extremely difficult to build, operate and program. Thousands of scientists and engineers across the world, including many in the Netherlands (a leading nation in quantum computing technology), work to build them. Increased focus is now also being placed on the development of the algorithms and programs that can run on them. This topic is the focus of the Shell collaboration with Leiden and VU. ‘As a theoretical chemist I am eager to adopt quantum computing’, says Lucas Visscher, a professor at VU Amsterdam, ‘as this provides a unique opportunity to understand what electrons really do in the key reactions of nature.’

In a key step forward, methods for calculating the forces acting on atoms bound in molecules using quantum computers were developed by this collaboration. This culminated in a prototype calculation for a simple system (the hydrogen molecule), which was implemented by collaborators in Delft on a real quantum computer made from superconducting qubits. The collaboration plans to further expand their work to simple models of photochemical processes. ‘I see the development of algorithms for nonadiabatic quantum dynamics as a route where quantum computers can soon overcome current limitations in describing important photochemical processes, as for example in vision.’ says Francesco Buda, a principal investigator at the Leiden Institute for Chemistry.

In all studies, great emphasis is placed on thoroughly comparing accuracy, speed and cost with established computational chemistry methods running on regular computers. This allows quantification of the real-world value of quantum versus classical computers. 'This is not a purely academic study, we have to keep track of the potential business value of using quantum computers, and how to realize it,’ says Detlef Hohl, Shell’s Chief Scientist for Computational and Data Science. ‘Today this is zero, because no relevant calculation can be executed better, faster or cheaper on a quantum computer than on a regular one. But this may change dramatically with time. Shell is conducting Research & Development which is preparing our business for the future. This includes developing technology which will enable Shell to become a net-zero emissions energy business by 2050 or sooner. Shell has supported research in the Netherlands for many decades, and this collaboration is another demonstration of our deep involvement in the Dutch Research & Development ecosystem.' 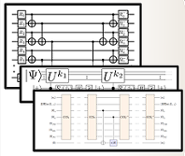