Report of the QSC 6th General Assembly in Leiden by Sebastian Zur. 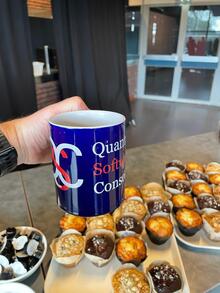 On Friday November 5th 2021 the Quantum Software Consortium (QSC) hosted its 6th General Assembly in Leiden. Although some Covid measures were still in effect, it was very revitalizing to meet many QSC colleagues
for the first time in real life since the pandemic, which was an especially new feeling for the staff members that joined the QSC during the pandemic!

We were welcomed in the Gorleaus building on the Leiden Bio Science Park, a building that holds much resemblance with a squished red Bloch sphere. The welcome contained a uniform superposition of muffins,
consisting of the basis states "blueberry", "banana" and "chocolate". These were paired with coffee and tea that was served in brand new QSC mugs that were given to all participants!

After some small talk and some much needed coffee we entered an intimidatingly large lecture room, where the presentations started with a welcome from QuSoft director and UvA professor Harry Buhrman, who gave us an update on the current state of the QSC. He was followed up by Gayana Vardoyan, a postdoc at QuTech working on quantum networks. She gave us a very clear explanation on the performance tradeoffs in choosing between either an architecture where devices function as both the processor and the network device, or an architecture where these two functionalities are separated over distinct devices.
Afterwards Jonas Helsen, a new QSC tenure tracker at CWI, took the floor to show us a novel method to efficiently characterize the quality of sets of quantum gates by using the ideas of the shadow estimation of quantum states.
The first part of the day was finalized by Ronald Hanson, a Delft professor and chairman of the Quantum Delta NL (QDNL) executive board, who joined remotely and gave us an update on the current state of QDNL.

It was time for coffee again accompanied by a great lunch. Here we got introduced to the sandwich "olives and ketchup", quite the acquired taste I must say. During the lunch there was room to socialize, participants enjoyed the last few rays of sunshine in 2021 and there were lab tours provided by our QSC experimentalist colleagues. With full
bellies we entered the lecture room again where we could listen to the QSC PhD researchers Fenglei Gu, Kirsten Kanneworff, Rene Allerstorfer and Jana Sotakova who gave us overviews on the research that keeps their
minds occupied on a daily basis. It was great to see the different research themes that the QSC is organized around.

Something must have gone wrong with normalizing our quantum states after a projection, since the original muffins were replaced by smaller cupcake versions of themselves in the coffee break. After this final coffee break it was time for the keynote speaker Barbara Terhal, a Delft professor and researcher at the Forschungszentrum Jülich, who took us on a walk in the landscape of quantum error correction and fault-tolerance.
Afterwards we ended the day with some final socializing accompanied by drinks and "bruin fruit". Many thanks to the organization for setting up such a fun and educational event, it was great to learn so much about all the different research being done at QSC and to see all our colleagues with whom we do not share a city :).