Last Friday, November 11, 2022, the celebrated quantum information scientists and longtime collaborators Charlie Bennet and Gilles Brassard joined us for a special edition of the Qusoft seminar in celebration of them being awarded the Breakthrough prize in Physics, together with Peter Shor and David Deutsch. Showing themselves as masters of their craft, both Gilles and Charlie gave thought-provoking (and often quite funny) talks. 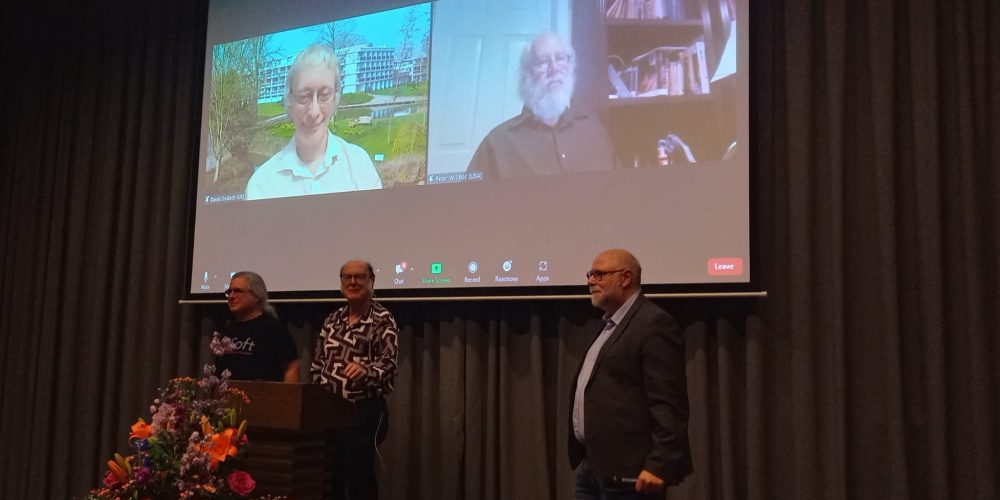 Gilles shared with us his thinking on the so-called “simulation problem”, a popular probabilistic argument that supposedly shows that the odds of us living in a simulation are much higher than you would think. Gilles took us through a mathematically precise version of this argument and then added his own thought, showing that a careful analysis of the computational resources needed for the simulation deflates the original argument, and gives us a decent shot at existing in base reality.

Following this, Charlie took us on a riveting tour of the interplay between physics and cryptography. His goal was to “problematize” the existence of private classical information. This is a foundational concept in cryptography, which is often taken for granted but, as Charlie showed through a series of examples, exists only in an approximate sense, since the laws of physics make it incredibly hard to prevent the leaking of information (although this information leakage will typically be undetectable to all but the most dedicated eavesdropper). He ended with a call to action, arguing that Do-It-Yourself cryptography ought to be preferable to Device-Independent cryptography in a practical setting, precisely because in this DI setting it is very hard to prevent the leaking of classical information after the cessation of the (quantum) cryptographic protocol.

Finally, co-winners Peter Shor and David Deutsch (digitally) joined the stage, where they explained how they came to work on quantum information theory before it was cool. It turns out Peter, David and Gilles were all originally inspired by Charlie, who was in turn drawn in by Stephen Wiesner, the inventor of quantum money, and also seemingly the progenitor of the entire field of quantum information.

If you are interested in joining these QuSoft seminars in the future, then please write an e-mail to Susanne van Dam (susanne dot van dot dam at cwi.nl) and she will add you to our QuSoft mailinglist.